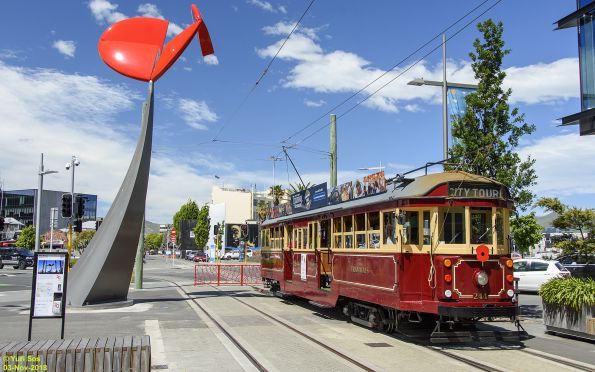 03-Nov-2018:  Ex-Melbourne W2.244 waits time at the current southernmost terminus of the Christchurch tramway at the corner of High and Manchester Streets.

The attractive wind-driven kinetic sculpture to the left of the tram slowly has four components that slowly and gracefully turn in the breeze.

Beyond the terminus, the tracks (but no catenary) continue over Manchester Street, the outbound track curving left into Lichfield Street then right into Poplar Street ending at the intersection of Poplar, High and Tuam Streets. The inbound track continues straight along High Street over Lichfield Street before coming to an end short of the Poplar, High, Tuam Street intersection.

Currently there are large supports blocking most of High Street holding up façades in High Street with building (re)construction going on behind the façades.

The current plan is for the track in Poplar Lane outside a popular innovation hub to extend down to and connect with High Street track, thus creating a loop. When we were there, we noted that a proposal had also been made for a more ambitious proposal to to extend the tramline along Lichfield Street to Madras Street and then back into High Street at St Asaph Street.

The Poplar Street loop is expected to be completed in late 2021.