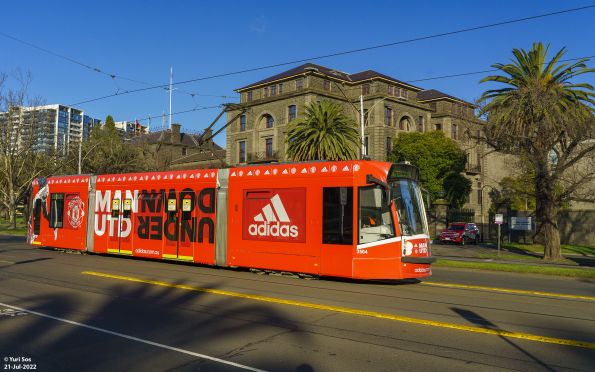 19-Jul-2022: It's a Melbourne gloriously crisp, clear 1oC winter's day - I haven't felt crunchy frosty grass underfoot for years as I prowled St Kilda Road northwards from Park Street looking for a shadow-free patch of sunlight. I finally found the perfect spot outside Victoria Barracks, a magnificent bluestone building originally constructed in the mid-1800s and currently the Depoartment of Defence admin centre.

English Premier League giants Manchester United soccer team is currently on tour Down Under in their pre-season “Winter Festival of Football”, no doubt to get away from the heatwave afflicting the UK and Europe.

Of course Melbourne's iconic stadium, the Melbourne Cricket Ground (MCG) was temporarily converted from its normal winter Australian Rules Football venue to a soccer stadium and as Australia's premier sporting city, Melbourne turned out in force to watch ManU play local side Melbourne Victory and rivals Crystal Palace in chilly clear weather (0-2oC) on the hallowed turf in two matches that drew over 75,000 fans each in this normally AFL-mad city.

As part of the pre-match hype, sports promoters Gemba and (quote) "adidas sent invitations to local celebrities and adiClub members that spelled out a date, a time, and yes, a tram stop. That lucky group of invitees were greeted by the unlikely sight of a Melbourne tram completely re-skinned in United’s colours and adidas branding, which ferried them all the way to the event at Fed Square.
"Little did they know that they would be sharing the ride with five United Players who would be appearing later at the launch. The VIPs not only got to chat to the players throughout the course of the journey, they were also gifted a new away jersey from their football heroes.

“We loved the idea of turning one of Melbourne’s iconic D-Class trams into something more first-class and exclusive – an up-close experience with one of the world’s most iconic sporting teams”, says John Weir, Creative Director at Gemba.

"As exclusive an experience as that tram ride may have been, everyday Melburnians and football fans will still get to experience the special tram for themselves, as it remains in operation for the duration of the football club’s tour Down Under." (endquote: from https://mumbrella.com.au website)