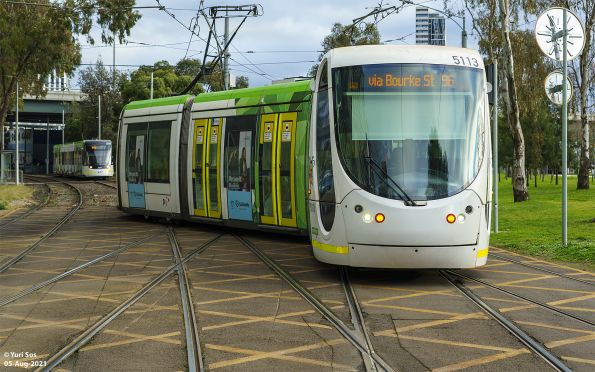 The driver of 5113 obviously thought 6095 was a through tram and rolled forward onto the junction stopping short of the crossover. 6095 started up, intending on heading back to Southbank Depot, entered the crossover, then halted as it saw that 5113 had blocked the junction. The front of 6095 was now sitting over the outbound points, the rear fouling the inbound main.  5113 was sitting over the junction on top of the points and fouling the outbound main to Southbank Depot and beyond.  In a true Mexican standoff, neither tram could go anywhere.

After a minute or so, as I'm standing right at the points 5113 starts to move slowly in reverse and watch in horror as the inbound cab decides it's going to Southbank! I scream out "STOP STOP" but driver of 5113 is at the other end of tram and doesn't hear me. Being at the outbound end of the tram on the St Kilda line he doesn't realise that half his tram is going elsewhere until there's an enormous grinding sound and twang and crash as the pantograph snags and flips over and the catenary bounces up and down.

The following two photos were taken probably 2-3 minutes after the derailment.
C2.5113 straddles the junction: front bogie on the Port Melbourne line, rear bogie on the St Kilda line, middle bogie undecided so sitting halfway between, catenary in disarray.