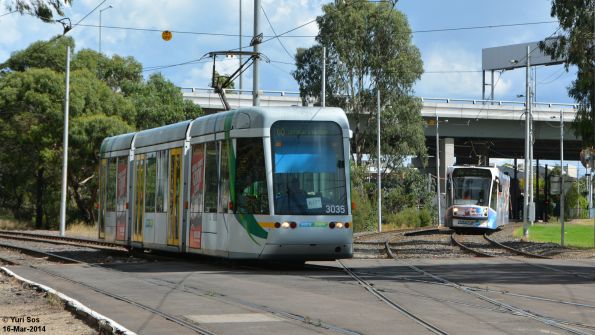 16-Mar-2014: (Grand Prix Race Day Shuttles):  Z3.182 took me back to Clarendon, whereupon a long walk to Port Junction ensued as trams returning from the GP ran express along Clarendon Street or had "Not in Service" as their destination.  It seems YT was charged with the task of getting passengers to the GP, but not collecting anyone on the return journey until the race was over.

At Port Junction, I noted C1.3035 returning from Middle Park on a shuttle while D2.5011 waited, giving way, on a 109a Beacon Cove - City shuttle.  I'dve thought the D2 would have been used on the GP shuttles rather than the C.