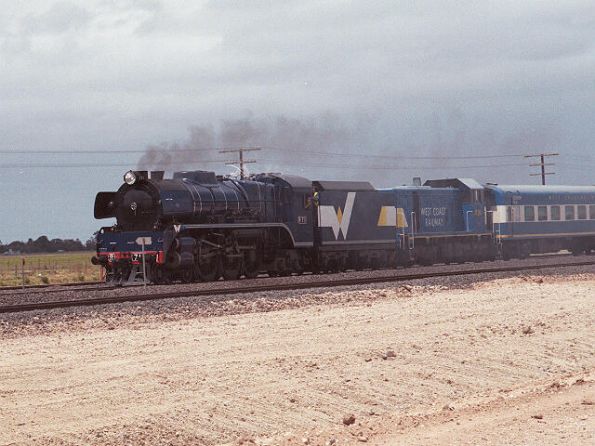 Wed 18 Nov 1998:  After a short stop at North Geelong "C", the train is shown here accelerating up the main towards Lara.

They stopped once more between Werribee and Hoppers Crossing for another check, then stormed up the line at 95 km/h to Newport for weighing.   The loco was within allowable limits and passed for operation on the mainline.

The train ran a test trip at full line speed from Melbourne - Warrnambool and return on Thu 19 Nov 1998, the crew noting that the modifications had delivered a noticeable increase in power.  The oil burning equipment worked well, producing a greater amount of superheat in the steam than previously (approaching temperatures found only in  SAR's "Red Devil"):  special lubricants were obtained to cope with the high temperatures.

Water consumption was dramatically reduced as a result of the modifications.  The R ran the return trip from Warrnambool to Newport (257 km) without taking water, and still had plenty in the tender on arrival at Newport.  (No R has managed this before - R707 made Melbourne - Albury nonstop once (317 km), but had little/no water left on arrival).