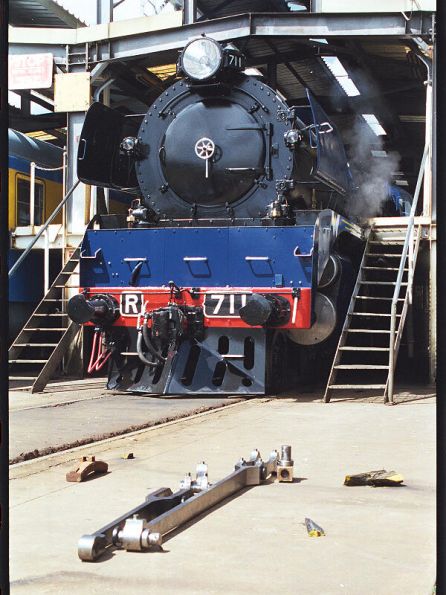 16-Nov-1998:  R711 is back at Ballarat East Shops. Shown in front of the loco is the radius rod removed after the left valve seized.  Steam can be seen exhausting from one of the valve inspection points, opened to provide a point of steam escape after the valve seized and before the loco could be moved.

The following day,  the R ran up and down the depot yard a couple of  times and was turned, but again the valves gave cause for concern.  The fireman's side valve was disassembled and required some modification.

At around 4PM left the depot for a trip to Warrenheip (using the Geelong line), with T369.   The drivers side valve again proved a problem, so the driver's side valve was modified as per the fireman's side.  The loco was run up and down yard for some time until the engineers were satisfied with the adjustments.