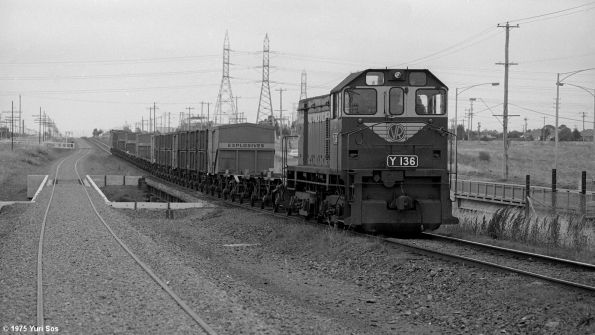 December 1975: Long before the Ring Road, ICI had an explosives  factory at Ardeer.  Twice a week, a Y class would run with empties from Tottenham to the ICI siding and return with loaded P vans, separated from each other by three vehicles of whatever they could cobble together at Tottenham.

In December 1975, I snapped Y136 inbound towards Sunshine crossing Kororoit Creek with a loaded explosives train, with groups of three flat wagons and three groups of three L wagons providing the spacing; the new south line between Sunshine and Deer Park West had been completed but was not yet in regular use.