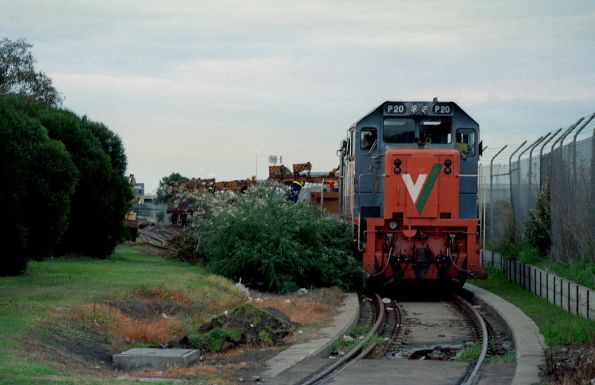 02-Aug-1998: Where? The giveaway is the dual gauge in the foreground and the dual gauge concrete sleepers under the loco. The loco is at the down end of the level crossing that ran diagonally through what was then the intersection of Footscray Road, Charles Grimes Bridge Road and Piggott Street and was the railway line to Webb Dock. It is a rail recovery train removing rail from the dismantling of this line. Dual gauge to Webb Dock? Who was the planner who was thinking that far ahead?


Why? This was necessitated as Melbourne Yard was also being dismantled to allow the "sympathetic and well thought out" (NOT) development of the Docklands Stadium and the attractive "developers'-snouts-on-the-trough buildings" that mark this area of Melbourne as a modern and iconic architectural masterpiece. At the same time, the former railway bridge over the Yarra was GIVEN to Mirvac on condition they turned it into a pedestrian bridge to access their residential towers built along the south bank of the Yarra on the north side of Lorimer Street.

There are still tracks here, just not the same ones nor gauge. This spot is pretty much the intersection of Harbour Esplanade and Bourke Street today.