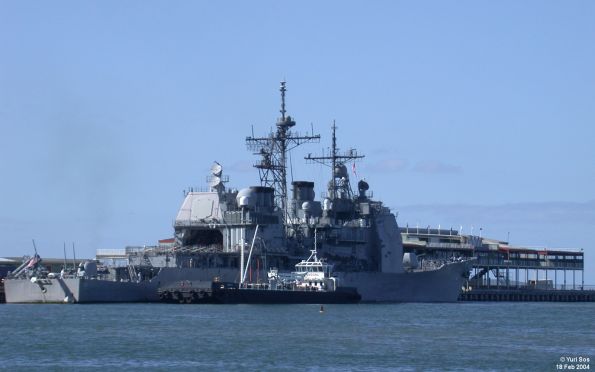 18 Feb 2004: The "USS Port Royal", the last of the Ticonderoga-class of AEGIS guided-missile cruisers, deployed with Peleliu Expeditionary Strike Group-One (ESG-1) in support of the Global War on Terrorism (GWOT) from 3 September 2003 until 11 March 2004 (according to Wikipaedia). She is visiting Melbourne on her way back to her home base at Pearl Harbour, Honolulu. Whilst the newest of its class (commissioned in 1994), it was set to be withdrawn from service in 2013, apparently never having fully recovered from running aground off Honolulu in 2009 (though this is open to debate between the Navy and Congress).