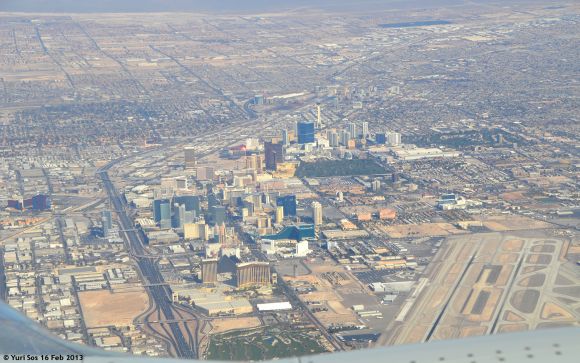 16-Feb-2013: Our American Airlines 737-800 is commencing its descent prior to turning 180o and landing at McCarran International Airport, Las Vegas, visible in bottom right of the image.  The Las Vegas strip is clearly visible in this shot looking north.

The gold 3-arm star at the bottom of the strip is the Mandaly Bay.  Next door is the pyramidal Luxor (its Sphinx obscured), then Excalibur (red and blue turrets). The NY skyline of New York New York is next on the left, whilst to its right the dark green hotel is the MGM Grand.  You can make out the Eiffel Tower marking Paris Las Vegas.  Further north on the left, the 3-arm hotel with the upper gold strip is the Mirage, and much further north the tower of the Stratosphere can be clearly seen.