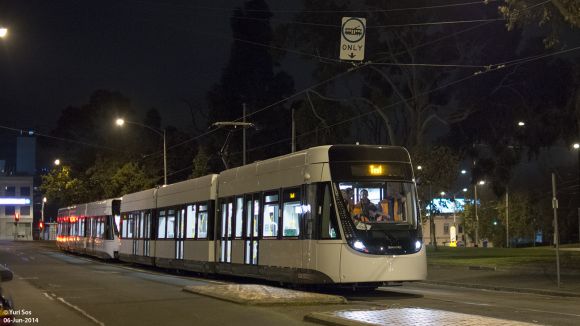 06-Jun-2014:  The original plan for this morning called for coupled Es 6007 and 6009 to depart Southbank Depot and run via Spencer Street, Collins Street, Spring Street and Wellington Parade to the East Melbourne Simpson Street sidings near Hoddle Street/Punt Road.  Unfortunately, there was no overhead power in Collins or Spring Streets, so a planned extensive electrical load testing around the CBD was severely curtailed.

Instead, the coupled Es ran out from Southbank into Spencer Street, reversed near Lonsdale Street and proceeded to head to East Melbourne via Flinders Street.  The trams are seen here in the Simpson Street siding.  Once the road traffic has been stopped and the points cleared of debris, the trams will run "wrong road"out into Wellington Parade and use the crossover to return to the City.